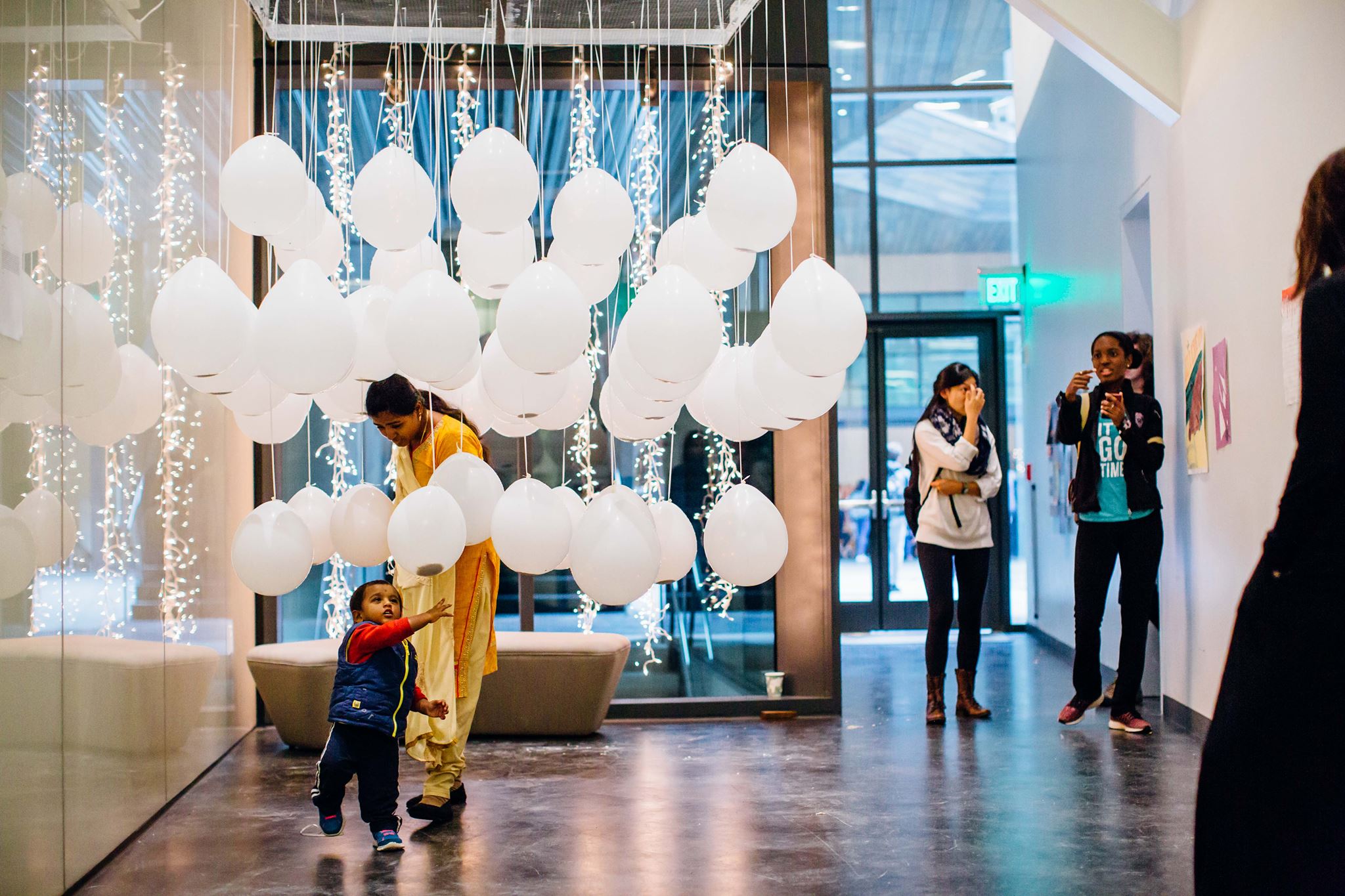 The idea came to me as I tried to juggle the demands of Stanford academia with a healthy allowance of self-care. A lot of my personal care comes from getting time to close the door, take a few breaths, and process. On a crowded campus with maybe one or two roommates and more than that number of group projects, it's not easy. So I became vigilant to the sort of negative space around me: what is it filled with? How does others' presence affect it? Does it have a positive consequence, or does it make me react uncomfortably?

My friend happened to have a white balloon someone had left behind in his room. It's half helium-filled body floated eerily around the space, and reminded me of a person's form. I began to think of it as a metaphor, and wondered how a situation could be represented with these balloons. They had an uncanny way of representing both order (tied to a specific location, dependent on its gaseous content) and chaos (have you tried to hold a bunch of balloons down in the wind?).

This piece was intended as a manifestation of headspace, its movements and its stresses, peace and discomfort, as affected by its environment. Twenty-five, helium-filled balloons in a five by five grid, inviting interaction and introspection. The balloons were measured to stand at about human height and shoulder length apart.

This second installation was intended to complement and challenge Part One. Rather than allowing wind to mainly affect the piece, each balloon was filled with sand and hung at different intervals of height (a curious consequence of this choice was the sound of shifting sand as people walked through the artwork). People were invited to roam through the art piece, hitting, tangling, or even standing still amongst the balloons. This upside-down orientation brought to attention the sort of physical and emotional response our space inspires. It was particularly whimsical, and I still think back to the little child who ran beneath the lowest layer hitting and playing with the most innocent intrigue.

Although I am primarily a product designer, this may be the project I am hands-down most proud of. Rigging and installing all the balloons for Part 2 took nearly seven hours through the night before the studio showcase, and was totally worth it. Watching pedestrians stroll through the balloons, giggle in delight, interact with the new invaders in their space, and take a moment to break from their thoughts and be present in whimsy was amazing.

Even a year since the installation, I still have Stanford peers bring up the piece and remark on their experience walking through the balloon grid. It was a simple idea that delighted their headspace, and isn't that the most beautiful thing about ideas?